How to Tell Your Timing Belt Needs Repair 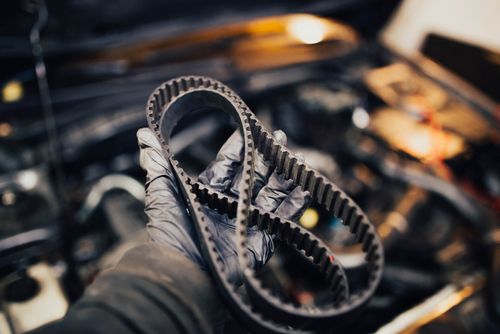 Even though you might not pay much attention to it, your vehicle’s timing belt is crucial to how it works mechanically. An internal engine part called the timing belt ensures that each cylinder fires at the right moment by synchronizing the crankshaft and camshaft rotations. You'll find your vehicle's timing belt near the front of the engine, under a timing cover. Because it's made of high-quality rubber, it will eventually need to be changed. Rubber doesn’t last forever. Without a properly functioning belt, your vehicle isn’t going anywhere.

What is a timing belt?

A vehicle’s timing belt is a toothed belt that coordinates the timing of the combustion process by connecting the engine's crankshaft to its camshafts. An engine won't run if the timing belt is broken. Industrial-strength rubber with nylon-reinforced cables inside often makes up timing belts. A timing belt is put through a lot of stress and strain. Despite being long-lasting, it will eventually wear down naturally and must be replaced before it slips or breaks. The engine won't start if the timing belt snaps, and the cylinder head or other adjacent parts may also sustain damage in severe circumstances.

Symptoms of a faulty timing belt

Although you might never take a look at your timing belt, it is vital to maintain your vehicle’s performance. You will be better prepared for a timing belt replacement if you recognize the symptoms. As your timing belt ages, these symptoms start to show up. It might split, succumb to dry rot, elongate, or even become out of alignment. Keeping your eyes and ears open is critical because most of the following issues will necessitate a replacement.

The best way to tell if your vehicle needs a new timing belt is to look at its mileage. There are warning indications for a bad timing belt that you shouldn't ignore, yet the majority of us don't even consider it until there is an issue. Most of the time, symptoms become apparent when trying to start your vehicle or if it starts performing strangely while running. Prevention is the best course of action because manufacturers specify a specific mileage for timing belt replacement. Have your vehicle evaluated if you think it needs a new timing belt. Generally, getting this belt checked every 30,000 miles is recommended.